Comments Off on Mirabilia, patterns and more patterns!

Here are the two new patterns. 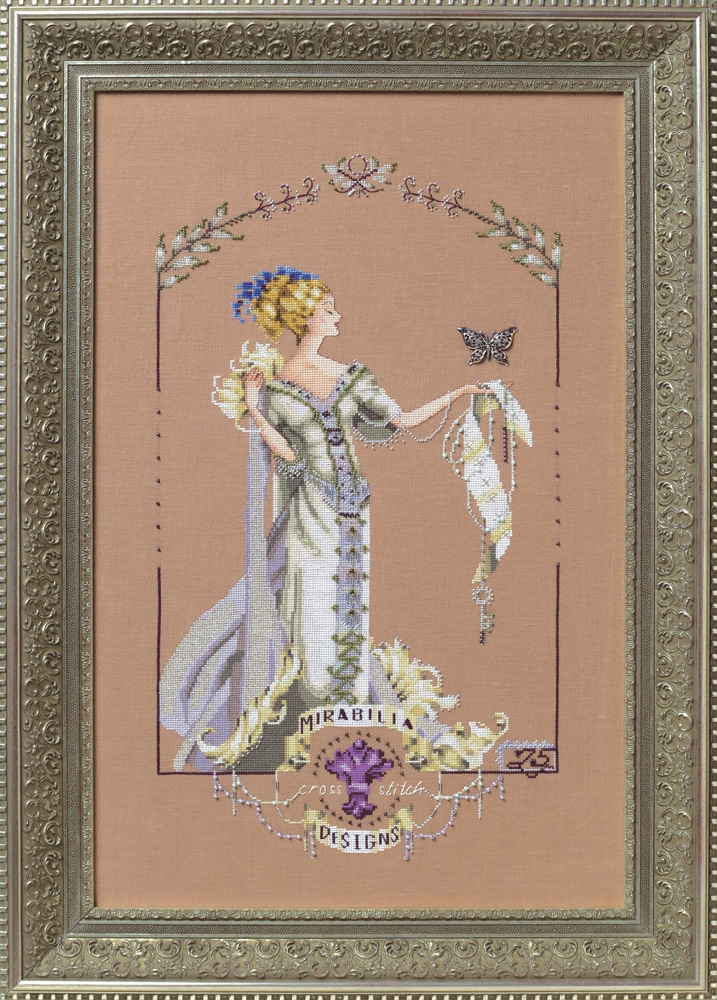 Lady Mirabilia is a limited edition with a special butterfly charm.

Alice is a delightful little girl with a watch. (Now where is the rabbit?) 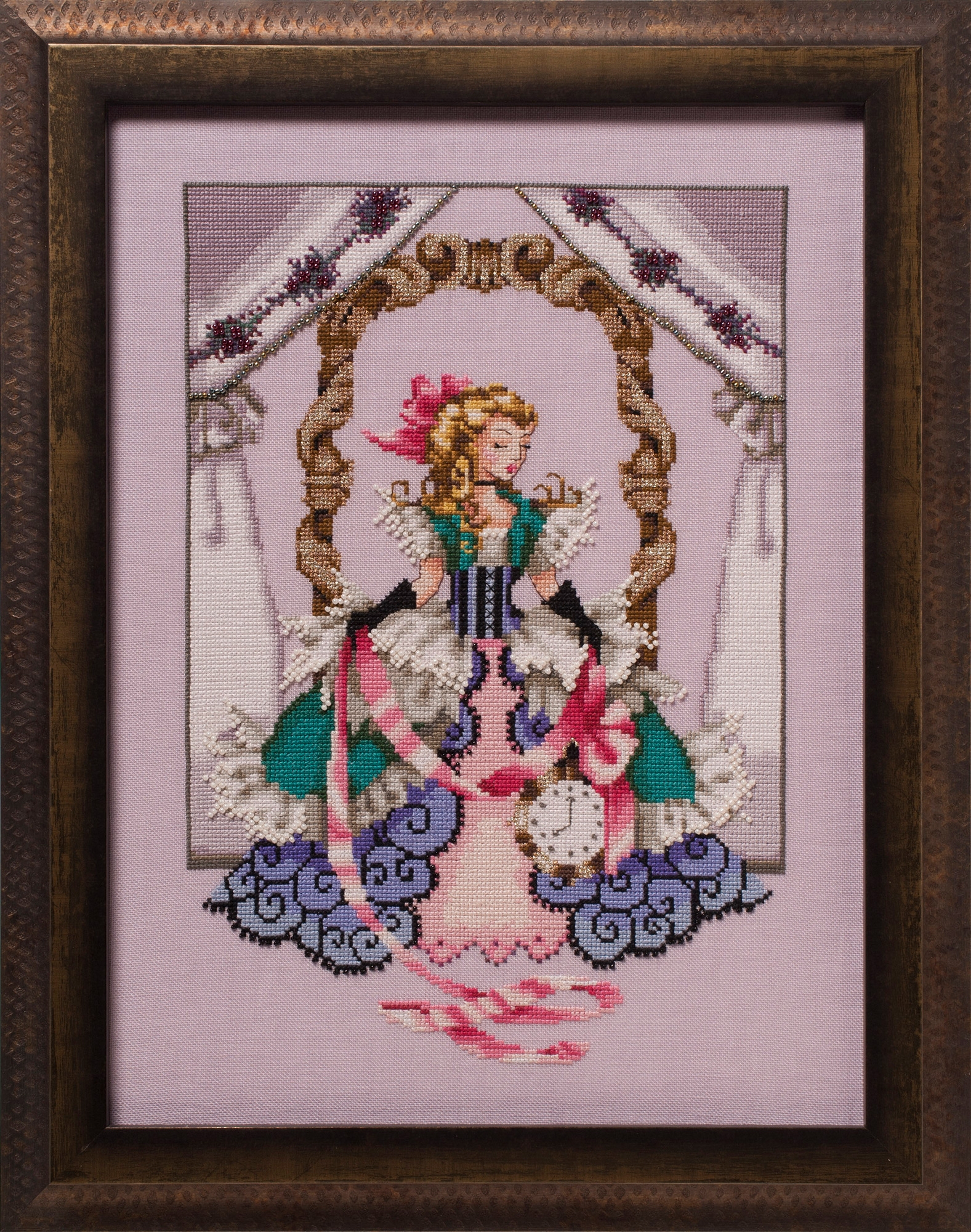 They also released a 25th Anniversary booklet that has information about  Nora Corbett  and some of her patterns. There is a bonus cameo design included in the book.

If you have been following the out of print prices for the patterns on the secondary market, you  have been amazed at some of the prices. I have seen the patterns sell for hundreds of dollars and then some of  them turned out to be bad copies. Now for a limited time we have newly printed patterns.

We have patterns and bead packages for:
Butterfly Fairy. 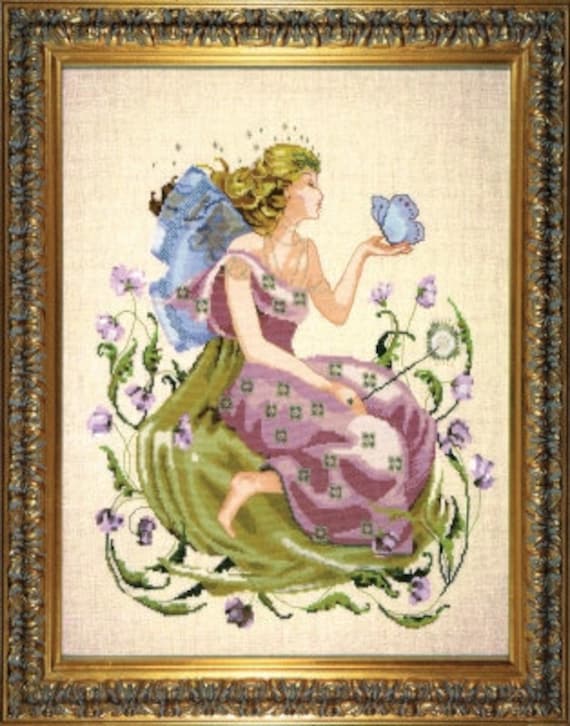 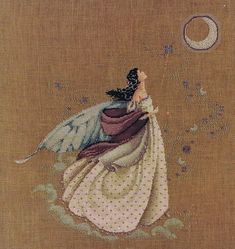 Her wings are a combination of pale blue and pale green that turns out to be the most fabulous shade of aqua.

The Seaside Kingdom – this one was in high demand so contact us soon to get yours. 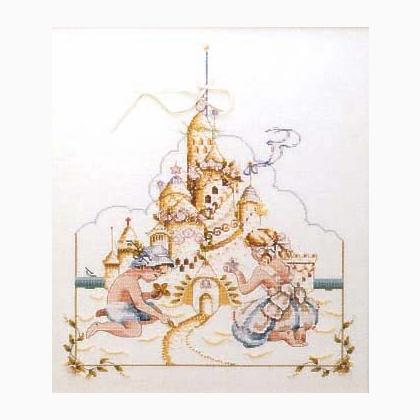 This bead pack has lots of fun special shapes.

We have sold all of the patterns for Lady of the Flag but do have some beads left.
Contact us to reserve your now.

Comments Off on He is here!!!! 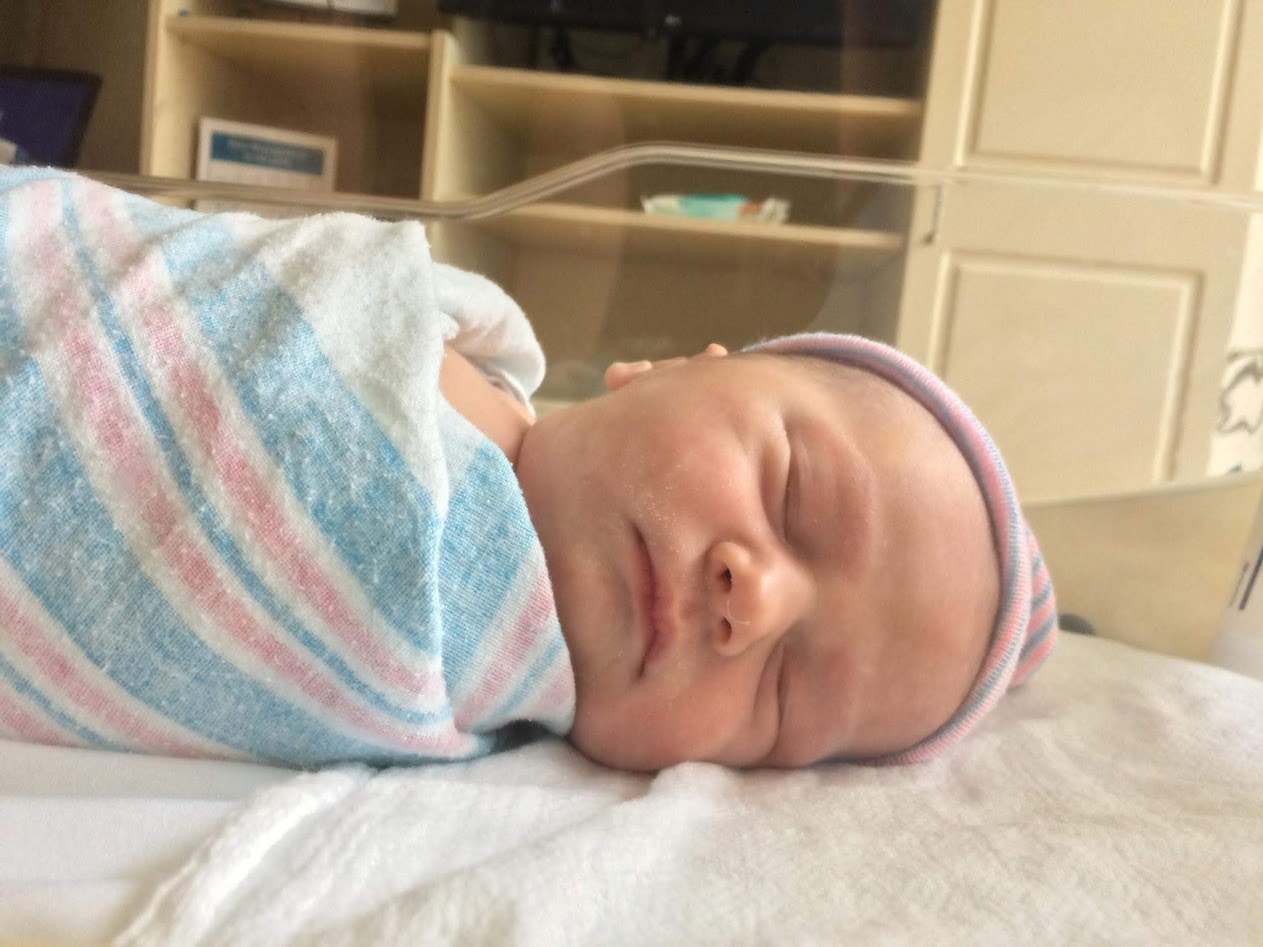 We wanted to share our biggest news with you, our friends.
We loved that so many of you were just as anxious about his arrival as we were.
Thank you for all of the love.
…The new Grandma and Greats in town… 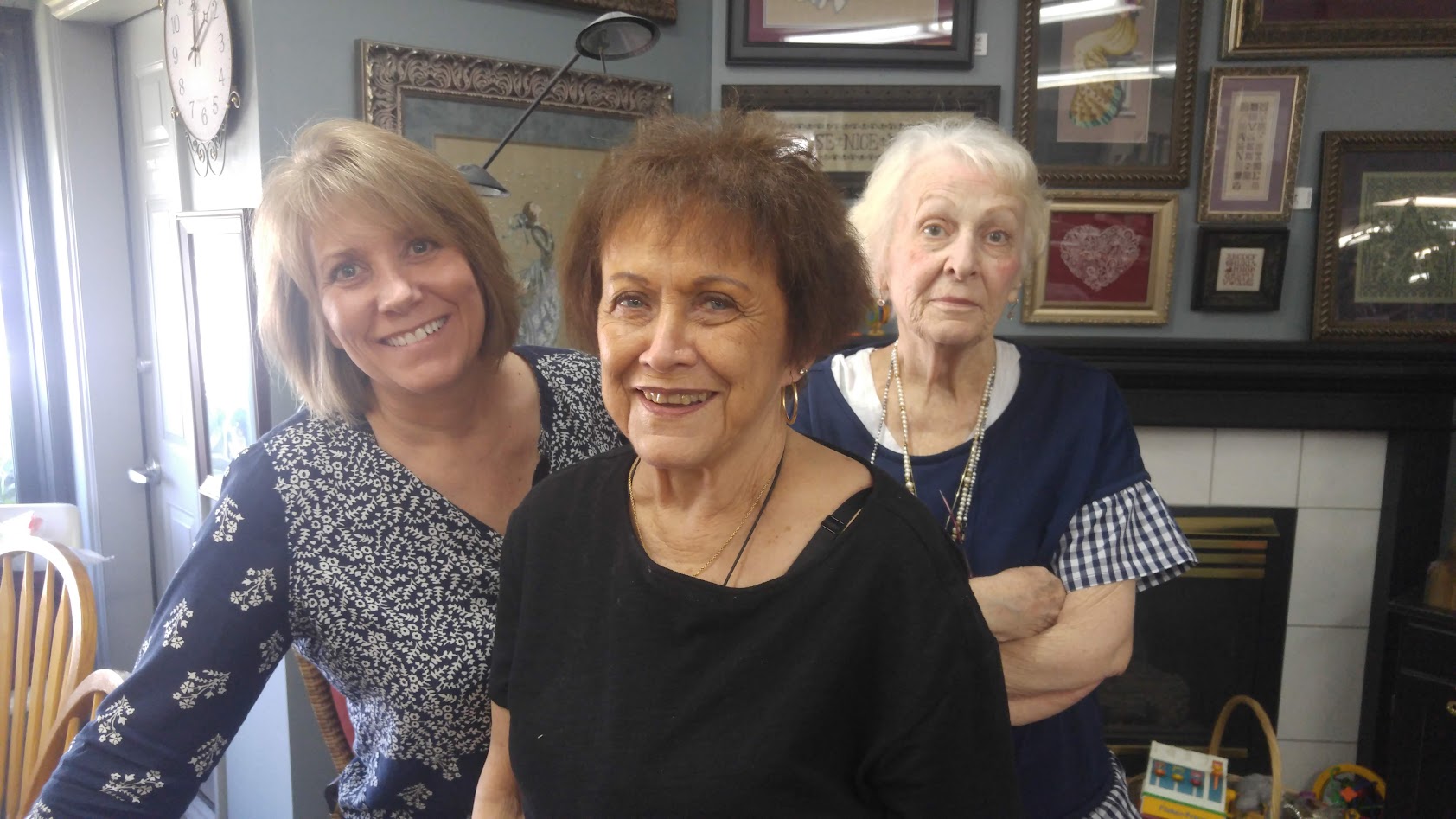 I will be traveling to spend some time with the kids.
I will be away from the shop from June 12th until July 3rd.
During this time Joy and our regular employees will be working to help you with anything that you need.  I won’t be doing any mail orders or framing while I am gone, but I will catch up just as soon as I return.
…Boy, it will be hard to leave them though….
June 4, 2018
at 1:47 pm, by craft center crew
Craftcenter of Fine Stitchery Blog

Comments Off on Carolyn’s hands at work…..

I just have to show off some of Carolyn’s hand work.
We are so fortunate to have her here at the shop.
We get to see all of her beautiful treasures and talents.
This is a piece she designed while taking an online class called,
Cabinet of Curiosities with Tricia Wilson Nguyen.
I have some pictures to share that I snapped when she had this at the shop.
If you would like to see more pictures or read about her design,
visit her blog at:
http://carolynstandingwebb.blogspot.com/ 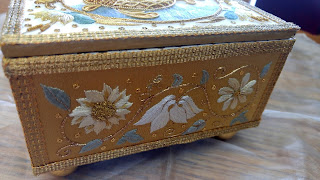 The technique used is English Goldwork. 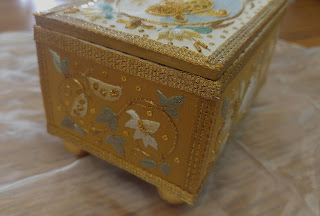 Each side features different flowers representing each of her and her girls favorite flowers. 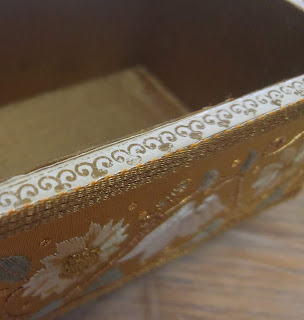 The lip is a gold print on paper 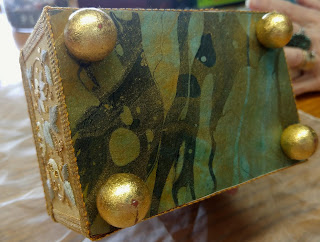 The bottom is a handmade marbleized paper with feet that have been gold leafed. 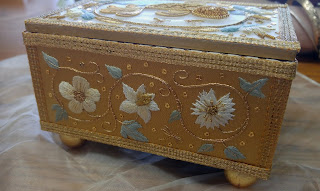 Every detail is exquisite. 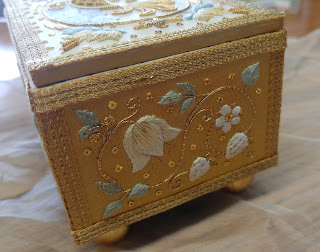 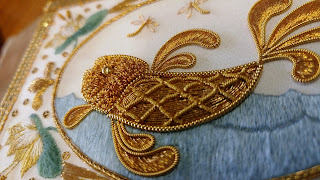 The fish is raised embroidery using various types of gold metal threads.
Check out her blog you will be awed with her talent!
June 4, 2018
at 1:08 pm, by craft center crew
Carolina House Designs

The shop now has all of the patterns from Carolina House Designs. Carolyn Webb (one of the ladies at the shop)has had a line of retail patterns for a number of years and has made some changes in how she is marketing her patterns. If you don’t know Carolyn, she is a talented designer and teacher who has been teaching embroidery all over the country for the past twenty years.
All of her patterns are shown at carolynwebbdesigns.blogspot.com but can only be ordered from a retail shop. There are about 30 designs right now.
We are going to feature a few of the designs on the blog and have some of her models on exhibit in the shop. She is working on some fun new designs and we will have them as soon as they are available.
The patterns that we are spotlighting today are adapted from the woven coverlets that were created in the early 1800’s in the United States. Itinerant weavers traveled around the country and using the wool spun by the women of the household, wove striking patterned blankets. The pattern could be woven from a standard pattern or created just for that family. The were usually white and one color and sometimes had dates and names woven into them. The overall pattern was created by designing one quarter and then mirroring that quarter for the whole coverlet.
The patterns can be stitched as just the one quarter or the whole coverlet. 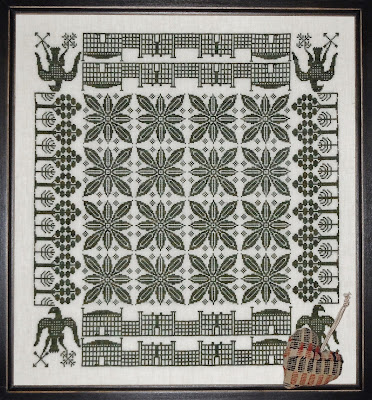 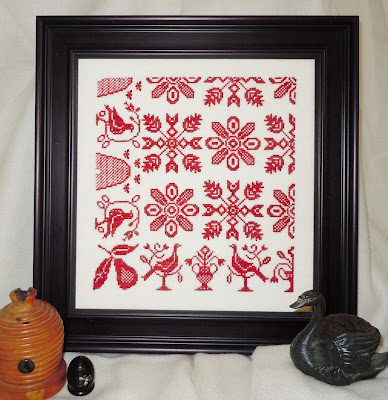 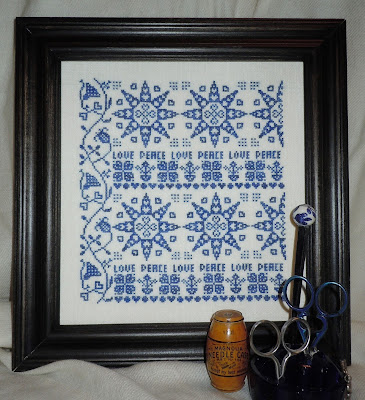 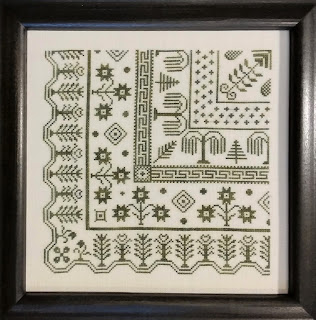 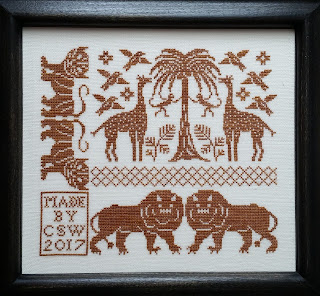